Thursday and Friday was my Nursing Pinning Ceremony and Graduation. When I look back at it college was the complete opposite of high school: It started totally awful but ended on a decent note, unlike high school which still bothers me to this day haha. To be honest my family was so happy during the past few days along with my friends but lately I've been feeling so down in the dumps. The break in routine and the fact I now have to study another month and a half for my board exams/the horrible job hunt aren't such a great thing.
To be honest I never thought I would reach this stage, I graduated on time in 4 years unlike a lot of people in my neighborhood who ended up slacking off. I'm so glad I had such supportive professors during my last 2 years of college.

Things I'll Miss:
Having health insurance
Not expected to work full time since I was studying
The relaxed schedule I had towards the end
The few friends I had during college
The professors I had

Things I wont Miss:
The douchebags that thought I was looking up bomb plans a week after Virginia Tech that caused me to be in huge trouble. Forced medications and therapy yay!
Douchebags
The roommates I had that wasn't my best friend from high school
And Douchebags

Time for me to grow up to speak.

Since I have more time on my hands at least until September, I should be on the forums more often. Woo

A big hearty congratulations Nuke, and though this may be a bit early; welcome to the silent (yet proud) hell that is the medical field.

It is truly one of the few fields where men and women are either tempered or broken. Personally, I think you'll be tempered and strengthened.

And true to good professors because there aren't enough in the college/university sect. In regarding the medical field, one of my favorites, I shall quote.


The Power of Claes Compels You!!!


If Fernando had Super Powers, He would be God!

Comments : He has super powers. He is God.


Your lack of planning does not constitute my emergency. 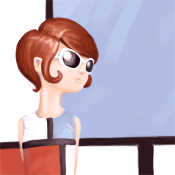 Location : A Town by the Sea, NSW Central Coast, Australia

Comments : If in doubt, overdress.

Thanks guys for the replies.

Silly thing is, I have to go back to the school for the Kaplan review classes for my board exam.

Comments : Karin Hilshire, WoD character based off of Triela from Gunslinger Girl.